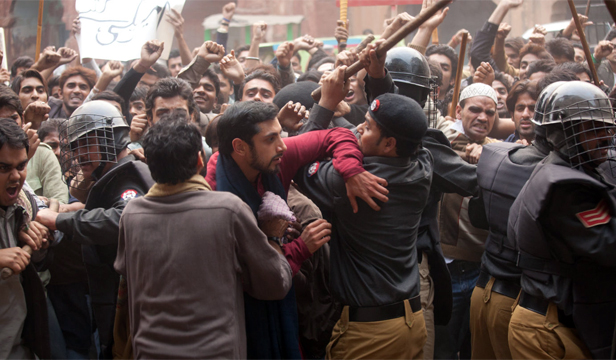 I have just come back from seeing a Pakistani-made movie,The Reluctant Fundamentalist, which is making the rounds in NZ cinemas.

The incredibly vapid review in the local media, in which the strength of the movie obviously escapes the review gives the movie only 3 ½ stars.

I would have to give it much more, because I was completely in thrall to the events and the world of the hero, Pakistani Changez (Riz Ahmed) and exited the cinema with an altered state of mind – quite simply I saw the world around me with completely different eyes.

Changez grows up in a cultivated intellectual. His father is a popular Punjabi poet, but it is clear that their circumstances are declining

He moves, as an 18-year-old to the United States and it is clear that he is bound for a brilliant career as a corporate raider on Wall Street (he is so much better at the game than his American counterparts.

His first overseas trip is to Manila where he helps to oversee the downsizing of a Filopino factory making many workers redundant.

During this trip the 9/11 attacks occur which complately turns his life around.

On the return journey he becomes a victim of racial profiling and is strip searched.

After this, and after a return trip to Pakistan for his sister's wedding when he returns with a beard, his whole life is changed.

The beard becomes symbolic of his changing self-image, but also, because of it,  he becomes an object of American suspicion and paranoia , and once again he is picked up, this time off the street outside his office, for interrogation.

After a trip to Turkey where he has an encounter which persuades him of the incorrectness of his livelihood and shows that he will always be an outsider he turns his back on America and the corporate world and returns to his roots in Pakistan, becoming a lecturer at a Lahore university.

Even at home he becomes caught up with post-9/11 American politics in Pakistan.

Revealing more of the plot would only spoil things.

For me, I could enter the world of this young Pakistani and viscerally I felt rage against the treatment that he receives from his time in America.

As in the case of most really powerful films it changed my whole perception of the world outside.

American reviews that I have read have seen it as simply a “why do they hate us” piece and place the protagonist close to fundamentalist terrorism and thus place him as an enemy.

The movie is far more nuanced than that. Although the feeling of rage against imperial America (while at the same time aspiring to much of what the American way-of-life has to offer) is quite palpable (and shared by this viewer) there is far more even-handedness and understanding towards some of the American protagonist.

None of the propagandistic caricature of Hollywood movies here!

I can highly recommend the movie if you can get to see it (or to read the novel) if you can't.