New Bankia shares tumble, wiping out family savings in Spain
Nationalised giant has now lost 99% of its stock exchange value since it was listed 22 months ago 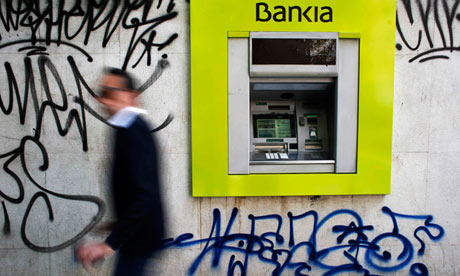 
Spain's banking crisis wiped out billions of euros of family savings on Tuesday as small investors who bought shares in the nationalised Bankia were finally able to trade them – but at only a fifth of their original price.

The wipeout on Madrid's stock exchange means that Bankia, which was created by the fusion of seven savings banks, has now lost 99% of its stock exchange value since it was listed 22 months ago.

Preference share owners had been given the tradeable shares, which came with a hefty haircut, as part of a cash injection worth billions of euros into the bank that wreaked most damage on Spain's financial system after suffering huge losses on toxic loans to real estate developers.

Bankia's 11bn new shares, part of a €15.5bn (£13.3bn) recapitalisation, tumbled as soon as they started trading on Tuesday morning. By the end of the day, they were worth half their €1 book value.

Trading in the new shares was meant to have marked a new start for the country's fourth-largest bank by market capitalisation. Last year, it needed a €24bn bailout as part of a wider European rescue of Spain's financial system.

"They're cheating us again, like they did before," Maricarmen Olivares, whose parents lost €600,000 in life savings made from selling her father's car workshop, told Reuters. "Everything is a swindle, the share listing, the compensation package, the value of the stock now."

Spain took €42bn of the €100bn offered to help it clean up banks that were drowning in a sea of bad real estate loans left behind by the country's burst housing bubble. Bankia was the biggest of four nationalised banks that needed funds, along with NCG Banco, Catalunya Banc and Banco de Valencia.

Questions are already being raised about whether banks will have to find yet more capital, amid worries that they have not owned up to all their bad property loans and as the country's economy continues to deteriorate. Reports suggest they may need €10bn more, though Spain can now easily raise any additional funds the state may have to provide on the markets.

Bankia may raise several billion euros from the sale of stakes in the British Airways owner International Airlines Group, electricity company Iberdrola and insurer Mapfre. It agreed last week to sell City National Bank of Florida to the Chilean bank BCI for $883m.


NCG Banco said on Tuesday it would sell its 80-branch EVO network as part of the restructuring plan negotiated with the EU after the injection of €10bn of public money into the lender.
Posted by seemorerocks at 16:59