The Killing of Tamerlan Tsarnaev's Would-Be Accomplice Wasn't So Simple 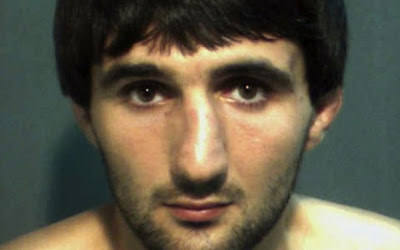 
Ibragim Todashev may or may not have pulled a knife on investigators in his own apartment. He may or may not have been ready to sign a confession implicating himself and Tamerlan Tsarnaev in a 2011 triple homicide. All we know is that lethal force was used when Todashev was shot and killed early Wednesday morning, and the only people alive to tell us the truth are the Massachusetts State Police officers and FBI agents who were in the room and pulled the trigger.

The facts: Todashev (pronounced TOE-duh-shev) was a 27-year-old ethnic Chechen who hung out with the elder Tsarnaev in Boston and moved to Florida two years ago. He was shot dead after apparently lunging at an officer after walking away from questioning at his condo near Universal Studios in Orlando. What spilled out in the immediate aftermath were reports that 1) Todashev was about to complete his written confession, perhaps strengthening the case against Tsarnaev; and 2) Todashev pulled a knife on investigators, prompting them to kill one of the only men in America who have known when Tsarnaev turned for the worse. Both of those claims seem a lot less solid today, as law enforcement sources reassess their leaks once again in this information flood of case — and as Todashev's family speaks out for the first time
Claim No. 1: He had a knife.
Where it came from: NBC News was one of the first outlets to turn the tide of the story — that Todashev drew a knife on investigators and that, after orally confessing to the triple murder but not yet finishing his written account, he got violent enough to get himself killed on the spot. The Associated Press attributed their own knife account to three anonymous law enforcement officials.
Is it true? We're not sure, but right now it looks unlikely. A couple of those three officials are now walking back their descriptions to the AP:
Three law enforcement officials, speaking on condition of anonymity, said Todashev had lunged at the FBI agent with a knife. However, two of those officials said later in the day it was no longer clear what had happened. The third official had not received any new information.

That's 66 percent of sources who are "no longer clear" if Todashev had a knife. The New York Times has one of its two senior law enforcement officials claiming Todashev had a knife "or a pipe or something." In CBS's report, there is no mention of the knife, but rather a violent "move" that Todashev made:
Law enforcement officials say the 27-year-old mixed martial arts fighter made a move that threatened the investigators.

And the FBI's official statement has no mention of a knife being drawn, but rather a "violent confrontation" which might be the "move" CBS is reporting:
The agent, two Massachusetts State Police troopers, and other law enforcement personnel were interviewing an individual in connection with the Boston Marathon bombing investigation when a violent confrontation was initiated by the individual

Why it matters
Well, one of the big questions is why the FBI used lethal force against Todashev. "This is something they should be trained for," Todashev's wife, Reni Manukyan, tells The Wall Street Journal today. "They should be trained to not use a gun in any way." If Todashev had a knife and charged at law enforcement officials, an argument could be made that lives were in danger. To be sure, he had a history: The Boston Globe describes Todashev as "a professional mixed martial arts fighter with a violent ­record."
But why shoot, when you've got a man with potential answers about the man behind a terror attack on American soil in front of you? "If somebody jumps on you and you have a gun, and you don’t do something, the gun will quickly come into play," one of the Times sources said. As NBC West Palm Beach reported, Todashev was meeting with FBI agents and two Massachusetts state troopers when he was shot. Outlets like New York's Daily News reported that Todashev "stabbed an FBI agent" before being shot — that would be harder to do without a knife.
As Gawker's Max Rivin-Nadler points out, investigators will have to figure out how Todashev, who was being interviewed at his house for three hours, came to be in possession of a knife (and if he actually did) and why a room full of law enforcement agents used lethal force against a man who might have been armed, at most, with a knife. Or something. And they'll have to deal with the fallout in a larger terror investigation and trial of Tsarnaev's younger brother

Claim No. 2: He was going to own up to the murder, on paper.
Where it came from: The string of the Boston marathon bombing investigation has led investigators to Orlando, to look for answers in the gruesome murder on September 11, 2011 in Waltham, Massachusetts, of three men — including an apparent "best friend" of Tsarnaev — who were left with slit throats and covered in marijuana, an apparent drug deal gone bad but possibly worse... or at least a sign that Tsarnaev had been a drug dealer or a killer before he took what had been thought as the fateful trip to Russian in 2012. Todashev had reportedly been questioned for some time, and had admitted to the investigators at his home that he and Tsarnaev were responsible, but he didn't finish or sign the written confession. And then:
"As investigators pushed at him towards a confession, he snapped," CBS's Bob Orr reported.
"Agents said Todashev was about to sign a confession admitting to a triple slaying that occurred in Boston in 2011," NBC Orlando reported.
"A second law enforcement official confirmed Todashev made the confession," reads CNN's report.

Is it true? Well, it's a dead man's word versus agents and officials close to the investigation. And Todashev's Chechen friends and family, who are insisting that they all distrusted the FBI but cooperated — and that nothing like this was suspected in the "final interview." In the days following the bombing, Todashev's wife tells WFTV in Boston, "He expected that they were going to come and question him, because they both come from the same place from Chechnya." That led to a series of interviews and the seizure of his computer and phone, she told the Journal. "He was supposed to be on a plane tomorrow, but he told he had to meet with the FBI," his father, Abdulbaki Todashev, told The Boston Globe in an interview from Russia today. "They killed my son and then they made up a reason to explain it." Turns out, Todashev didn't have a lawyer.

And if Todashev was going to sign a confession and admit that he and Tsarnaev were guilty of the triple homicide in 2011, his friends sure didn't see it coming. "Several of Todashev's friends told the Sentinel that the FBI told him this week's discussion would be his last interview and that he was going to be cleared," The Orlando Sentinel's Jerriann Sullivan reported. Then again, if you were going to sign a confession admitting to a triple homicide, you probably wouldn't tell your friends, would you?
"I think something went wrong there. I think they just shot him. He didn't do anything. I know him. He just wanted everything to be over," one of Todashev's roommates told NBC West Palm Beach, and his estranged wife added, "He wasn't involved. So he was not even nervous [to talk with the FBI]." Todashev's wife could be talking about the Boston bombings, but she was right about Todashev being cooperative. Todashev, according to CBS, had been talking with the FBI since two days after the Tsarnaev brothers were identified. He even postponed that trip to Chechnya to work with investigators his roommates said, making his "snap" seem even more random.
Why it matters: A confession would have solved the triple homicide, and it would have cemented Tsarnaev's role in that crime. Since reading Dzhokhar Tsarnaev his miranda rights, investigators haven't been able to extract information about the Tsarnaevs as freely as they'd like — or at least it hasn't spilled out in public as much as the people of Boston would like to hear. A confession might have been a big piece in the puzzle of the Tsarnaev brothers. Instead, we're left with a Jack Bauer-style tale of secret confessions turned deadly, with more questions than answers.
What's perhaps more puzzling is that the story doesn't seem to add up: What new piece of information makes a guy who has been cooperating with FBI agents for the last month or so turn on them? Could the seizure of the computer have led to more revelations? Could the threat of jail time have dawned on him? And even more macabre, one of Todashev's friends told NBC Orlando that he had been questioned with Todashev by agents on Tuesday night — and that Todashev felt like he was going to die. "He felt inside he was going to get shot," Khusn Taramiv said. "I told him, 'Everything is going to be fine, don't worry about it.' He said, 'I have a really bad feeling.'"
What happens now? The The Orlando Sentinel reports that the FBI's team of investigators will be picking up the pieces and trying to figure out what exactly happened, as is routine when a suspect who has very important information regarding a terror suspect and unsolved triple homicide is shot to death. The New York Times points out that there may even be public questioning of who, exactly, killed the would-be accomplice: "It was not certain who, or how many officers, had fired on Mr. Todashev." What we do know is that Todashev's death isn't immune to uncertainty, and confusing conflict of facts that have seemingly followed the Tsarnaevs and the FBI for more than six weeks since that fateful afternoon in Boston.