Gina Rinehart Calls For Sterilization of The Poor

Conservative billionaire Gina Rinehart called for the sterilization of the poor today, arguing that the only way to alleviate poverty is to stop the "underclasses" from multiplying. 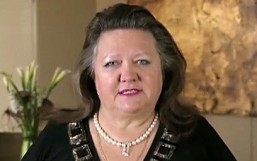 
In a video uploaded to her official YouTube account, the Australian mining heiress said that income inequality is caused by differences in intelligence, and eugenics is the only answer.


"Our nation faces a grave economic crisis as the combination of a strong Australian dollar and falling commodity prices sap our ability to compete globally," she explained. "The only logical solution to this crisis is to strengthen the quality of our most precious resource: human capital.


"Only by eliminating waste and focusing on our brightest, most efficient workers can we hope to see off our rivals in the emerging world."

Rinehart is the richest person in Australia and ranks as one of the wealthiest women in the world. Most of her fortune comes from a mining company she inherited from her father and later built into a leading exporter of iron ore.


Her fortune prospered during Australia's long commodity export boom, but is under threat as China's economy slows and iron ore prices tumble. Adding to her woes is the rising cost of production.


Late last year, Rinehart made a video arguing that Australians needed to accept lower wages because people in Africa were willing to work for $2 a day. But in today's video she seems to have realized that even that won't be enough.


"Paying Australians less is a part of the solution, but it can't be the whole fix. It's no use paying someone at all if they're too lazy, drunk, and stupid to properly operate our sophisticated mining equipment.


"So I'm willing to pay a decent wage, as long as I'm getting the son of a doctor and not the son of a failed bartender on welfare. The problem is that the underclasses seem to be outbreeding the intelligent folks, and I can't find a decent worker anywhere.


"That's where our government comes in. By stopping the poor from procreating, we can create a new class of intelligent, hard-working, well-paid Australians that will forge our economic future."


Rinehart recently ranked 16th on Forbes' list of the most powerful women in the world, ahead of Australian prime minister Julia Gillard. Her fortune is estimated at over $21 billion in U.S. dollars.
Posted by seemorerocks at 18:38