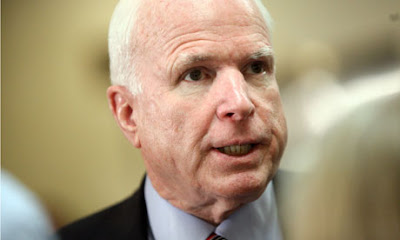 Pressure on the White House to arm Syrian rebel groups is intensifying after a surprise visit by hawkish US senator John McCain and fresh reports of chemical weapons attacks.

The Republican war veteran met rebel leaders inside Syria to discuss their calls for heavy weapons and a no-fly zone to help them topple President Bashar al-Assad and bring the bitter civil war to a conclusion.

McCain's office confirmed to the Guardian that he had slipped into the country in recent days but declined to comment on the outcome of his talks with the rebel groups or whether it had hardened his views on arming them.

The Arizona senator has been leading efforts in Congress in recent weeks to force Barack Obama to intervene in Syria following reports of alleged chemical weapons use by forces loyal to Assad.

As the most senior US politician to have visited Syria, his intervention is likely to strengthen the hand of hawks in Washington at a time when parallel efforts are being made by the French and British governments to persuade the European Union to lift the arms embargo.

Meanwhile the US State Department continues to pursue diplomatic efforts to bring the civil war to an end, successfully encouraging the Russians to persuade Assad to take part in peace talks in Geneva next month.

Capping off an eight-day trip to the Middle East and Africa, secretary of state John Kerry flew into Paris on Monday to see Russian foreign minister Sergey Lavrov and exchange updates on their respective diplomatic efforts.

The meeting coincided with new French reports of chemical weapons use in recent days. Reporters from Le Monde spent two months with rebel groups in the Damascus area and say they witnessed repeated use of poison gas by government forces. One attack is claimed to have taken place as recently as 23 May, in Adra, a zone of very heavy fighting between government forces and the rebels north-east of the capital city.

Le Monde's reporters said they visited eight medical centres in the eastern part of the Ghouta region and found only two where medical directors said they had not seen fighters or civilians affected by gas attacks. In Nashibiyya, doctors said they had admitted up to 60 cases from the Otaiba front in a single day, 18 March. While the nature of the chemical attacks could not be confirmed, it is thought they involved the toxic nerve agent Sarin, and were treated by medical staff using Atropine.

Le Monde's photographer also claims to have been with rebels when they were attacked, seeing them gasping for breath and vomiting before fleeing the area. The photographer says he suffered blurred vision and and respiratory difficulties for four days.

It has been a difficult time for the rebels, who are now facing Syrian government forces bolstered by support from Hezbollah and have been pushed back in a number of key towns.

Opposition leaders met among themselves on Monday in Istanbul for the fifth straight day to overcome internal divisions to decide a delegation for the peace talks. And while they have grappled for unity, they have not given a firm yes to the peace strategy outlined by Kerry and Lavrov earlier this month.

Beyond providing powerful reinforcements to Assad's regime, Hezbollah's involvement increases the risk of spillover into Lebanon, a country as ethnically divided and fragile as Syria. Two rockets struck a Hezbollah stronghold in southern Beirut on Sunday, raising fears that the country could be plunged back into civil war.

Senator McCain is said to have met with General Salem Idris, the leader of the Supreme Military Council of the Free Syrian Army during his visit, according to The Daily Beast website, which first reported the trip.

He stayed in the country for several hours before returning to Turkey. In Syria and Turkey, McCain and Idris met assembled leaders of Free Syrian Army units that travelled from around the country to see the US senator.

Inside those meetings, rebel leaders called on the United States to step up its support to the Syrian armed opposition and provide them with heavy weapons, a no-fly zone, and airstrikes on the Syrian regime and the forces of Hezbollah.