Cyprus Bank Deposits Plunge By Most Ever During "Capital Controls" Month 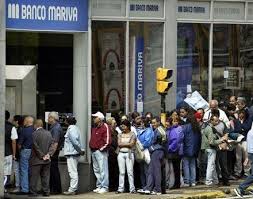 
Following the improvised and very confused bail-in of the Cypriot banking system in mid/late March, one of the key requirements was to contain the liquidity within territorial Cyprus, and prevent the outflows of critical bank funding liabilities - i.e., deposits - abroad thus causing a waterfall cascade of ever increasing capital needs and bigger and better bailouts. Thus capital controls, which two months after the bailout, are still in place. Judging by just released Cyprus Central Bank data they failed. Because even though the deposit outflow in March, when the fiasco happened, was a moderate €3.8 billion, which the European politicians promptly pointed to as confirmation of a job well done, it was the April outflow that was the jawdropping number.


In a month in which deposit flight should have been largely contained, Cyprus banks saw a record outflow of 6.4 billion, or 10% of its entire deposit base, in one month!


But the sad punchline is that while deposit flight by domestic residents was an unfortunate if explainable €3 billion, it was the €3.1 billion in deposit reduction by "Non-Euro Residents" - read Russians, who circumvented capital controls, and pulled a whopping 16% of their entire deposits held in the tiny and now completely insolvent island nation.


Total Cyprus bank deposits: no need to show the arrow at the right side.

And the monthly change broken down by sector:

Unless Cyprus implements some controls that truly work, at this pace its entire banking system will be completely deposit-free in under one year. And it will need to sell much more than all its gold to continue keeping the Troika happy and in compliance with all the future (because there will be many more) bailouts.