Syria's Assad warns Israel on air strikes and Golan
Syria's President Bashar al-Assad has warned Israel that it will respond in kind to any future air strikes. 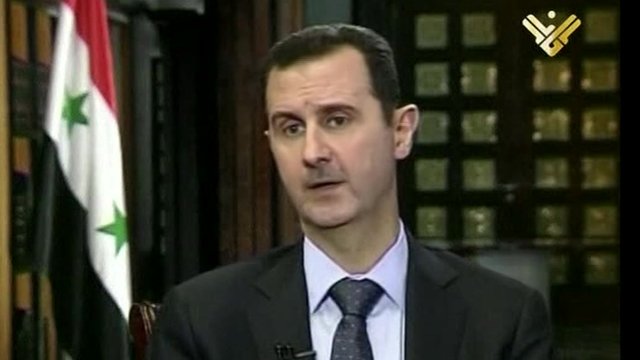 
In an interview with a Lebanese TV channel, he said there was "popular pressure" to open a military front against Israel in the Golan Heights.

He also suggested Syria may have received the first shipment of an advanced Russian air defence system.

Israel has warned it would regard the Russian missiles as a serious threat to its security.

Mr al-Assad was speaking to al-Manar TV, which has close ties to the Lebanese Shia militant movement Hezbollah, a close ally of the Syrian government.

Israel has carried out three air strikes on Syria to stop the transfer of advanced weapons to Hezbollah in Lebanon.

"There is clear popular pressure to open a new front of resistance in the Golan," Mr Assad said.

Israel has occupied the Golan Heights since the 1967 war. It annexed the territory in 1981, in a move that has not been recognised by the international community.

Syrian shells have hit Israeli positions on the Golan Heights, though it is unclear whether they were aimed at rebels in border areas, and Israel has returned fire.

Syria and Israel have been in a state of war since 1948 but the border had been relatively calm in recent years. 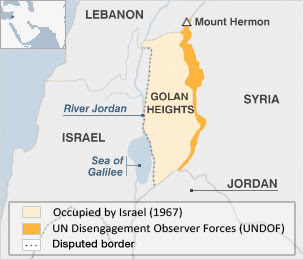 Excerpts released from the al-Manar interview ahead of broadcast quoted Mr Assad as saying Syria had already received a first shipment of S-300 missiles from Russia.

But in the interview itself, he said only: "All we have agreed on with Russia will be implemented and some of it has been implemented recently, and we and the Russians continue to implement these contracts."

The S-300 is a highly capable surface-to-air missile system that, as well as targeting aircraft, also has the capacity to engage ballistic missiles.

Ahead of the interview, Israeli government minister Silvan Shalom said Israel would "take actions" to ensure that advanced weapons did not reach groups such as Hezbollah, but there was no need to "provoke an escalation".

He told public radio: "Syria has had strategic weapons for years, but the problem arises when these arms fall into other hands and could be used against us. In that case, we would have to act."

The military chief of the main umbrella group of Syrian rebels, the Free Syrian Army, has accused Hezbollah fighters of "invading" Syria.

In a BBC interview, Gen Selim Idriss claimed that more than 7,000 Hezbollah fighters were taking part in attacks on the rebel-held town of Qusair.

More than 50,000 residents were trapped in the town and a "massacre" would occur if it fell, he added.

Mr Assad also said Syria would "in principle" attend a peace conference backed by the US and Russia, if there were not unacceptable preconditions.

The main opposition group outside Syria said it would not join the talks while massacres continued.

The opposition has been meeting for more than a week in Istanbul to elect new leaders and devise a strategy.

For his part, Mr Assad said it would not be surprising if the conference failed, and if it did, it would not make much difference on the ground, because what he called the "terrorism" of the rebels would continue.

Russian, US and UN officials will meet next week in Geneva to prepare for the proposed conference in June. 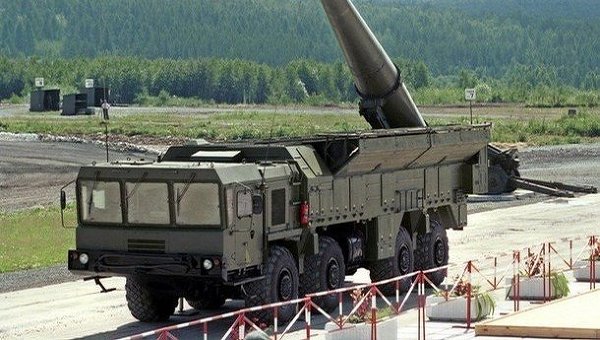 Assad's remarks were allegedly made during a pre-recorded interview to be aired on Hezbollah-controlled Almanar television channel on Thursday evening at 10:00 p.m. Moscow time.

But a high-level source at Lebanon-based Almanar, who said he had been present throughout the interview, told RIA Novosti by telephone that at no point did Assad explicitly confirm any S-300 deliveries.

When Assad was asked about the delivery of the anti-missile systems, the source – who requested that his name not be printed – said, the Syrian president replied that “everything we have agreed with Russia will be implemented, and a part of it has been implemented already.”

By Thursday afternoon, the Al Akhbar newspaper, which reported Assad's comments as an exclusive, appeared to backtrack on the veracity of its story, which also included a statement attributed to Assad that the rest of the S-300 equipment "will arrive soon."

The Assad quotes were "professionally stolen" through sources at Almanar and any information provided by the television station is more reliable, an Al Akhbar employee told RIA Novosti in a telephone interview, also requesting anonymity.

Documents revealing the existence of an agreement between Russia and Syria to supply the sophisticated S-300 air defense system, which can target ballistic missiles as well as aircraft, were first reported in the Russian press in 2011, but official confirmations have been scant. However, earlier this week Deputy Foreign Minister Sergei Ryabkov mentioned the deal’s existence, according to Russian media, saying a contract for providing Syria with S-300s had been signed “several years ago.”

Reached by telephone Thursday, Russian state-owned arms exporter Rosoboronexport declined to comment on whether elements of the S-300 system had been successfully delivered to Syria.

The shipment of the S-300s is a source of contention between Moscow and Washington. Last week US Secretary of State John Kerry said the presence of the anti-missile systems in Syria would be “destabilizing” for the region.

Russian officials publicly refuse to confirm or deny the S-300 deliveries, but argue that they would be legal under international law and would help to contain the Syrian conflict.

Steps such as the delivery of S-300s are restraining some "hot heads" from turning the Syrian conflict into an international conflict with the participation of outside forces, Ryabkov said Tuesday.

S-300 missile systems, which are capable of simultaneously tracking up to 100 targets while engaging 12 at a range of up to 200 kilometers and a height of up to 27 kilometers, could dramatically raise the risks of a potential airstrike against Syrian targets.

Israeli jets have reportedly launched attacks on Syria, including the capital Damascus, several times this year. Tel Aviv said recent strikes in May were targeted at weapons being transferred to Hezbollah in Lebanon, according to Western news agencies.