The move away from the dollar continues

BRICS to sign pacts for trade in local currencies 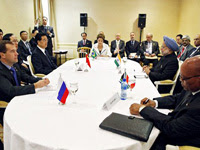 Zeebiz.com,
26 March, 2012
New Delhi: The five major emerging economies of BRICS -- Brazil, Russia, India, China and South Africa -- are set to inject greater economic momentum into their grouping by signing two pacts for promoting intra-BRICS trade at the fourth summit of their leaders here Thursday.
The two agreements that will enable credit facility in local currency for businesses of BRICS countries will be signed in the presence of the leaders of the five countries, Sudhir Vyas, secretary (economic relations) in the external affairs ministry, told reporters here.
The pacts are expected to scale up intra-BRICS trade which has been growing at the rate of 28 percent over the last few years, but at $230 billion, remains much below the potential of the five economic powerhouses.
Brazil's President Dilma Rousseff, Russian President Dmitry Medvedev, Chinese President Hu Jintao, South African President Jacob Zuma and Indian Prime Minister Manmohan Singh will hold their fourth BRICS summit Thursday.
Besides participating in the summit, Manmohan Singh will hold bilateral talks with each of the visiting leaders. The Brazilian president will stay over for an extended state visit March 30-31.
Vyas said the summit will focus on a cluster of global issues, including finding ways of sustainable recovery from the festering global downturn, reforms of international financial institutions, the UN reforms, inclusive growth, food security and energy security.
The BRICS report on synergies and complementarities between the economies of the five countries, which will serve as a reference guide for promoting trade and investment, will be released in the presence of the leaders.
The report has been prepared by a multi-national group of experts led by Kaushik Basu, chief economic advisor to the Indian finance ministry.
The Delhi Declaration that will be adopted at the end of the summit will reflect the BRICS' collective position on these issues.
The BRICS summit will be preceded by a meeting of trade ministers of the five countries and a business forum of leading corporates of these countries.
South Africa joined the BRIC, a term coined by Goldman Sachs economist Jim O'Neill to denote the four fastest-growing emerging economies of the world, changing the nomenclature of the grouping to BRICS, in April 2011 at the Sanya summit in China.
The summit will also attempt to add greater political content to their interactions by discussing key international issues like the situation in Syria and Iran's confrontation with the West over its nuclear weapons.
Sources said it will be a challenge for BRICS leaders to come out with shared positions on these two tricky issues given differences in perception and approach on how best to deal with these potential flashpoints.
.
Posted by seemorerocks at 21:12