Dow Jones on a high

We live in a world of a total disconnect between Wall Street and the real economy.  This is a world of cooked books, where unemployment and employment levels can both fall at the same time; where we can be on the verge of collapse while the economy is ‘recovering’
Dow industrials hit pre-crash 13,000 landmark
The US stock market has reached a major landmark in its journey back from lows hit during the financial crisis. 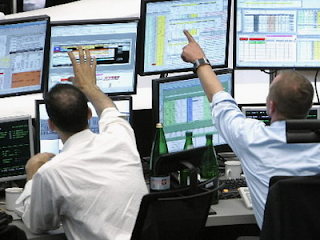 BBC
29 February 2012
The Dow Jones industrial average closed above 13,000 for the first time since 19 May 2008, just four months before the collapse of Lehman Brothers.
Analysts say it reflects a growing confidence in the US economy and solid profit reports from US companies.
The Dow added 23 points, or 0.2%, on Tuesday to close at 13,005. It briefly topped 13,000 earlier this month.
"I think it's a momentous day for investor confidence," said Jack Ablin, chief investment officer at Harris Private Bank.
"What this number implies is that the financial crisis, that we were all losing sleep over, it never happened because now we're back."
While the Dow has added 6.5% this year, other measures of market performance have performed even better.
The S&P 500 is up 9% and the Nasdaq composite, which is dominated by technology stocks is up 14%.
But economic data has improved in recent months, and while Europe's debt crisis is far from resolved, the situation is seen as more stable than for some time.
"Two months ago, we were talking about a double-dip recession. Now consumer confidence is growing," said Ryan Detrick, senior technical strategist for Schaffer's Investment Research.
"A major milestone like 13,000 wakes up a lot of investors who have missed a lot of this rally."
Posted by seemorerocks at 21:31