It looks as if everyone is preparing for major social unrest this coming summer.


I wonder also how much of this will be directed at peaceful protest (such as Occupy) that challenges the centres of power. 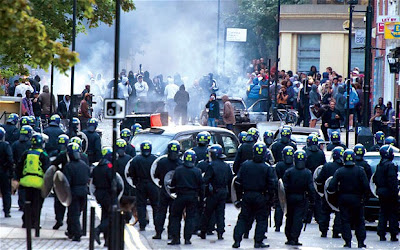 the Telegraph,
28 January, 2012
Hundreds of soldiers from 3rd battalion The Parachute Regiment spent last week learning how to contain and arrest "rioters" in a series of exercises mirroring last summers violence.
Defence sources have confirmed that if violence were to return to British cities, especially during the Olympic Games, the Paras would be "ideally placed" to provide "short-term" support to police forces around the UK.
Such a request would have to be made by the Home Office and would have to have Prime Ministerial approval, according to the source.
During the exercises at the Lydd training base in Kent, the elite troops were pelted with petrol bombs and missiles and "fought" running battles with gangs of protesters as part of the battalion's "public order training".
The battalion is the lead unit in the Airborne Task Force - the Army's premier rapid response unit and can be called on to deal with a wide range of emergency situations - from hostage rescue to riot control - around the world.
Sources have stressed however that being riot-trained does not necessarily mean the Paras will be deployed onto British street in the event of future wide-scale public disorder; instead the move was described as "prudent contingency planning".
There is not understood to have been a specific request from the Home Office or police for the training to be carried out.
The riot training could be used if soldiers were called in to evacuate British nationals or embassies in the face of public disorder in a foreign country.
In the past, riot training was carried out by all troops deploying to Northern Ireland where public disturbances were commonplace. But those skills have been lost following the withdrawal of troops from the streets of the province.
But it is understood that commanders of units likely to be deployed into public order environments have been must have troops ready to be able to deal with all military and civil emergencies.
As well as 3 Para, the Army has another unit known as the "Public Order Battalion", also trained to deal with rioting, bringing the total number of troops to around 1500.
During last week's training package soldiers were taught how to use body-length use riots shields, protect themselves from missiles and how to identify and arrest "ring leaders' using specially trained "snatch squads".
Troops were trained into how to work as teams armed with body-length shields in driving back hostile crowds. The exercise culminated in a full scale riot with fellow soldiers acting as aggressors.
Major Richard Todd, the officer commanding A Coy 3 Para, said: "Learning how to deal with public order situations is a new skill for on a challenging and extremely realistic course.
"Many of the drills are no different to what the Roman Army used to do, with highly disciplined soldiers advancing forward under the protection of shields.
"The key to dealing with large, hostile crowds is control and knowing when and how to react to what is happening in front of you.
"This training is about getting soldiers used to facing a high pressure situation so they don't overreact if they have to face it for real."
Private Peter Harrington, 19, who was also taking part in the exercise added: "It is scary to have petrol bombs thrown at you and really gets the adrenaline going.
"I've had the experience of it now and learnt that dealing with public order incidents is all about looking out for each other and keeping a cool head."
Last summer's rioting was sparked by the police shooting of Mark Duggan in Tottenham. The violence quickly spread across London and to other cities where police attacked with fire bombs, shops were looted and businesses burnt to the ground.
The violence, which saw home owners being forced to jump from burning buildings, led to calls for the Army to be deployed on to the streets to support the police.
One senior source said: "The police couldn't cope with last year's riots and the Army came very close to being deployed.
"All of the Army's riot equipment was in Scotland at the time and that created a time delay but lessons from that have been learnt. The Army could have deployed but it would have been only marginally quicker than the police.
"Soldiers would have powers of arrest and would be entitled to defend themselves using minimum force. It is unlikely they would be armed but that would be an option if the situation deteriorated.
"They would almost certainly deploy with baton rounds, which are discriminate and, if used correctly, non-lethal."
The riots were the were the worst for a generation and caused over £300m of damage. Hundreds of shops and warehouses were looted as gangs of youth organised attacks via twitter and other social media sites.
The number and spontaneity of the riots often meant that police from forces across the country, but especially in London, were stretched to the limit and in some cases unable to cope.
Local residents were forced to form vigilante groups to protect their communities after confidence in the police evaporated.
Posted by seemorerocks at 16:08